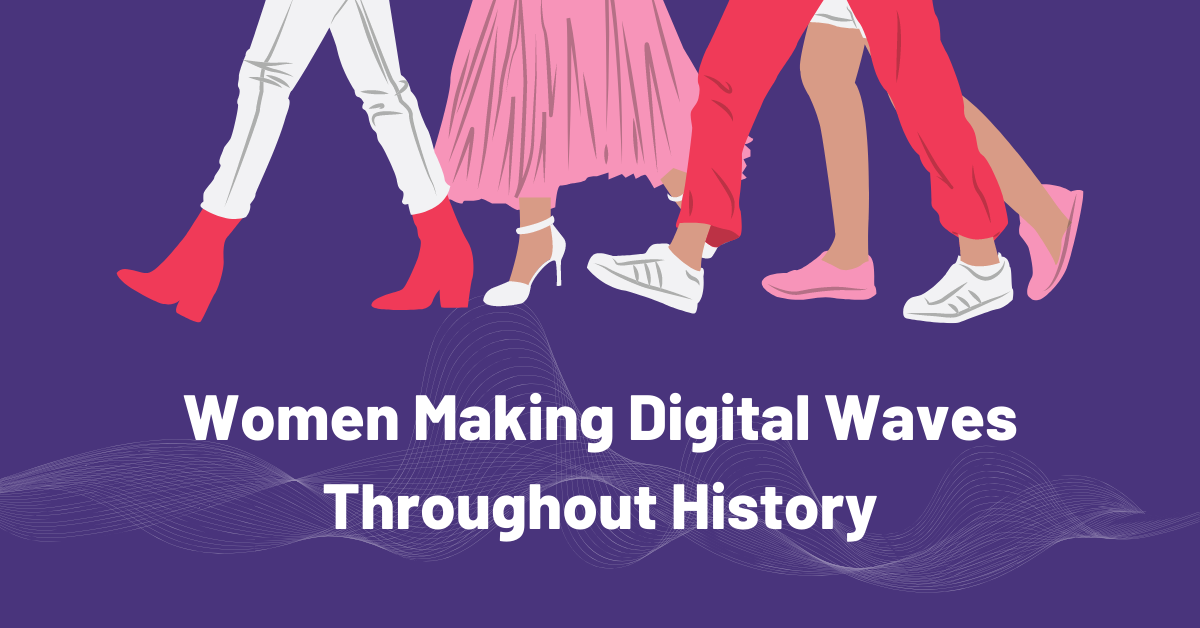 The month of March is National Women’s History month and as part of our social campaign we wanted to continue to celebrate this with a special blog! The tech industry is traditionally heavily dominated by men, however there have been plenty of influential women who have paved the way in tech throughout history – yet they are often overlooked. In this article we look deeper at the role of women in technology and celebrate the 5 most influential women that have made digital waves throughout history.

Since 1987, the United States has formally recognized March as National Women’s History month. The month-long commemoration began with Women’s History Day in 1978, formed by the school district of Sonoma, California. A vast majority of students celebrated with essay competitions, presentations, ending with a parade held in Santa Rosa. This caught national attention and was backed by President Jimmy Carter, who first dedicated the week of March 8th as National Women’s History Week. Soon after, Congress establishes this as a national observance and the rest is history!

There have been plenty of extraordinary women that have developed or invented great work, but have been consistently neglected. Yes, we all celebrate and acknowledge women during the month of March, but we should honor these women by praising them often and the legacies they leave behind – without which, could not have been possible in advancing the technologies we use today.

There are so many iconic women with amazing accomplishments that we simply cannot list all of them, but today we celebrate the top 5 women who paved the way in the tech industry.

Born in 1815, Ada Lovelace is considered the first computer programmer in history. Although she wrote about a computer, the Analytical Engine, that was never built, she realized that the computer could follow a series of simple instructions, a program, to perform a complex calculation. To commemorate her work, the U.S. Department of Defense created a computer language called “Ada,” and was approved on December 10, 1980. The Department of Defense Military Standard for this language (MIL-STD-1815) was given the number of the year of her birth. Various awards and medals have been also named after Lady Lovelace, making her the first woman pioneer of her time.

Rear Admiral Grace M. Hopper was a computer scientist and one of the first computer programmers to work on the Harvard Mark I. Her work led to the development of COBOL, an early programming language that is still used today. In 1947, she recorded the world’s first ever real computer bug, and it is also said that she coined the phrase: “It is often easier to ask for forgiveness than to ask for permission.” Hopper often endured many obstacles, being denied by the Navy trying to enlist early during WWII, and her education being snubbed based on the fact it would have no value to the war during that time, but she preserved. Her career path had led her to many lifetime achievements including contributing the English language for the UNIVAC (the first general-purpose electronic digital computer).

Austrian born Actress and Inventor, Hedy Lamarr and composer George Antheil invented a radio guidance system that used frequency hopping and spread spectrum technology to defeat the threat of radio jamming by the Axis powers during WWII. It wasn’t until the 1960s when the US Navy adopted the technology, however, the primary principles of their work are incorporated into today’s technology – which we all know this as Bluetooth and GPS. Similar methods are used in legacy versions of CDMA and Wi-Fi. Both Lamarr and Antheil’s work led to their induction into the National Inventors Hall of Fame in 2014.

African American computer scientist, rocket scientist and mathematician Annie Easley broke through the barriers and achieved monumental success. She was one of four African American employees working the lab and was a leading member of the contributing team that developed the Centaur rocket stage (which was responsible for sending the Surveyor spacecraft to the moon during the Apollo Program). Her contributions included​​developing and implementing code that analyzed alternative power technologies and identifiers to solve problems, which laid the foundation for future shuttle launches.

American computer scientist Adele Goldberg was known for her development of the programming language Smalltalk-80, which influenced the first Apple computer. This language introduced a programming environment of overlapping windows on graphic display screens. Smalltalk’s format was simple and customizable allowing objects to be transferred among applications effortlessly. Goldberg and Alan Kay were involved in the development of design templates that are still used presently in software design. She eventually collaborated with Steve Jobs demonstrating her team’s graphical user interface concepts (better known as GUI) that he later adopted with the development of the Macintosh desktop environment.

The month of March is a time to reflect on the role of women in our industry, but also one to reaffirm our commitments to celebrating their role everyday. We must continue to celebrate women across all industries by vocalizing their achievements and celebrating their contributions. This quote from Psychologist Penelope Lockwood helps to affirm this:

Outstanding women can function as inspirational examples of success, illustrating the kinds of achievements that are possible for women around them. They demonstrate that it is possible to overcome traditional gender barriers, indicating to other women that high levels of success are indeed attainable.