Kiuwan On-Premises (KoP) is based on a client-server architecture that includes these major server components:

Kiuwan On-Premises can be installed on a single host or on multiple hosts (externalizing one, some or all of the provided infrastructure services).

You can also install Kiuwan On-Premises under your own AWS cloud, replacing the provided infrastructure services with compatible AWS services.

Kiuwan On-Premises and its roles

The default installation will create a Kiuwan instance of each role.

All needed services are re supplied as Docker containers. The following table summarizes all the available services:

The following diagram shows the infrastructure that KoP installer will create by defaulthow Kiuwan On-Premises would be set out by default (that is, a single host default installation): 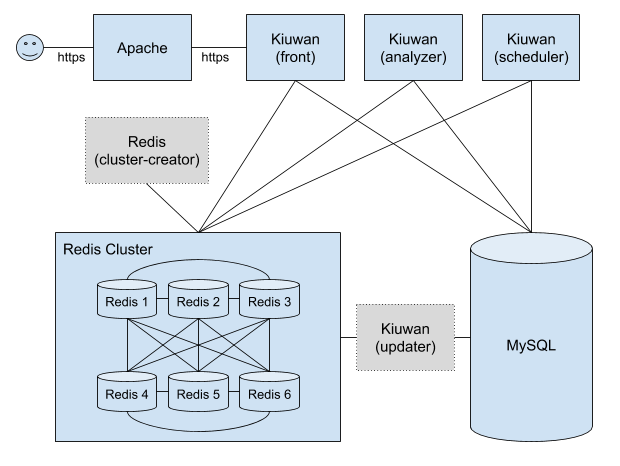 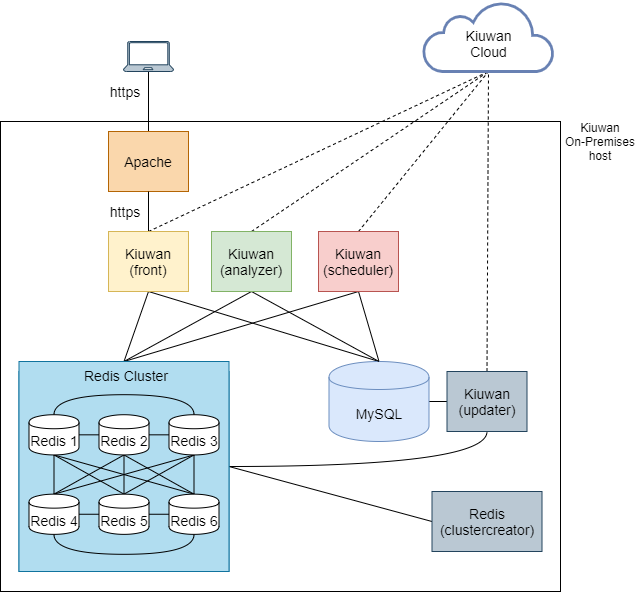 The main purpose of each piece is (service names are shown between parentheses):

Note that connection with Kiuwan Cloud is only needed in some situations (see Needed internet connections).

Depending on your needs, the Kiuwan On-Premises architecture supports both clustered environments and single-host installations. You can:

All Kiuwan instance containers can be scaled up (to a limit) or down to the default configuration. This means that you can start more containers of each Kiuwan role depending on your load needs.

As an example of the flexibility that the Kiuwan On-Premises installation tool provides, an alternative and possible configuration is depicted in the following image (Kiuwan Cloud and temporal services were ommitted to simplify the diagram):